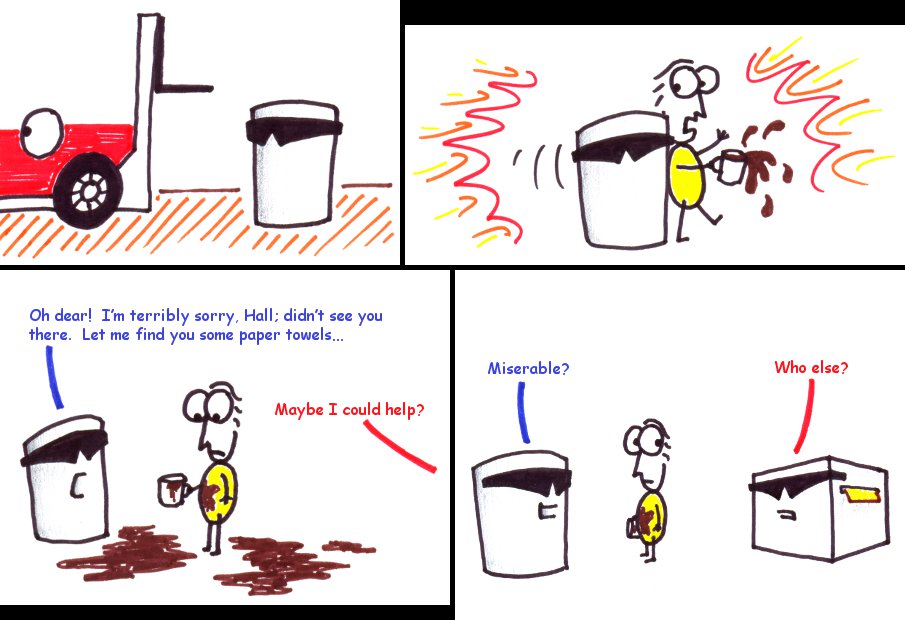 By MGHC
Posted by The Colclough at 11:58 No comments: 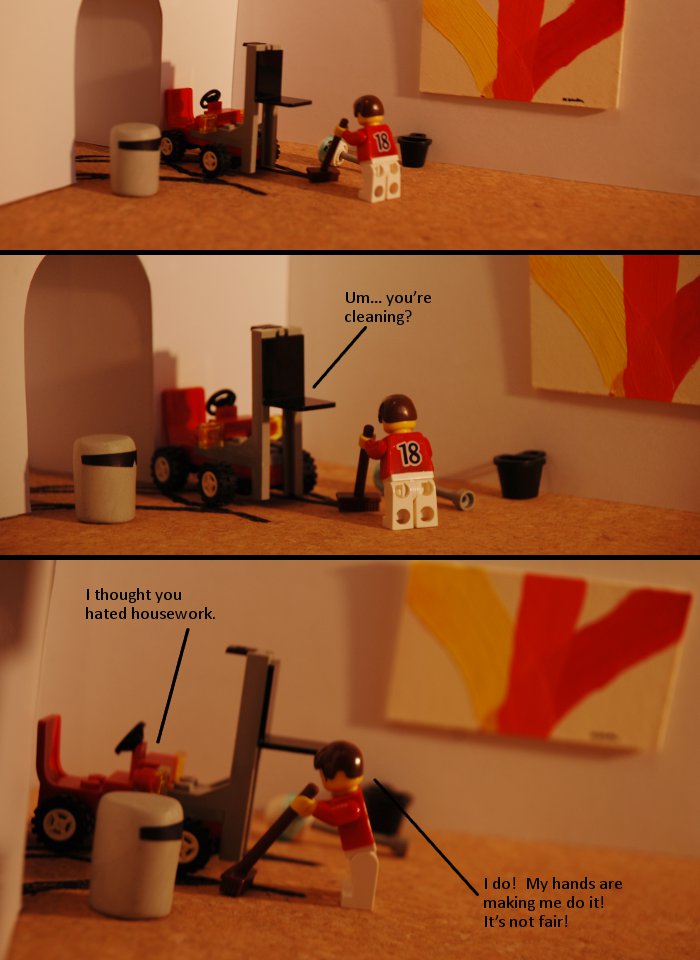 Script by MGHC & TMJ --- Artwork by SRJ
Posted by scruffytheshetland at 09:59 No comments: 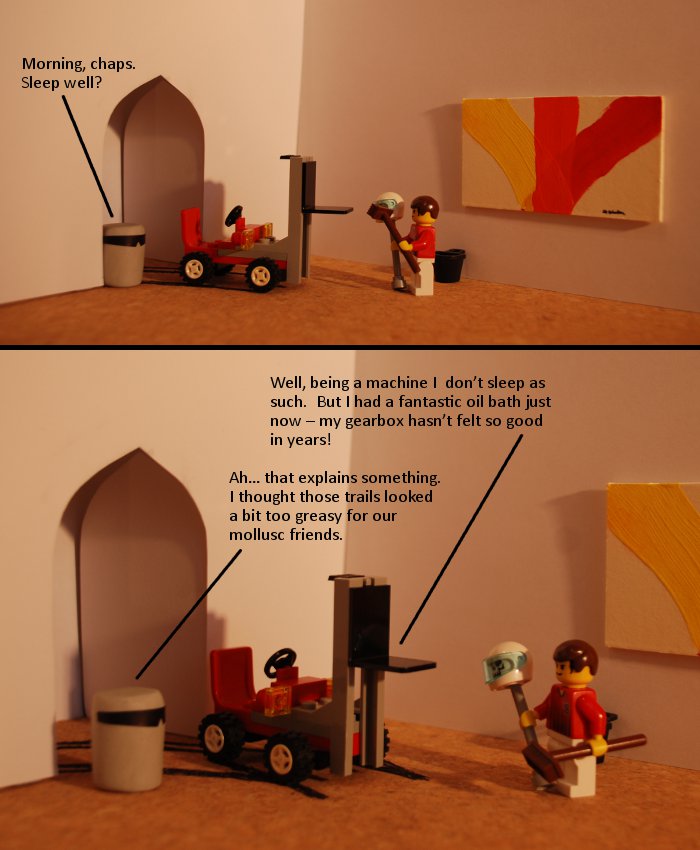 Script by MGHC --- Artwork by SRJ
Posted by scruffytheshetland at 09:51 No comments: 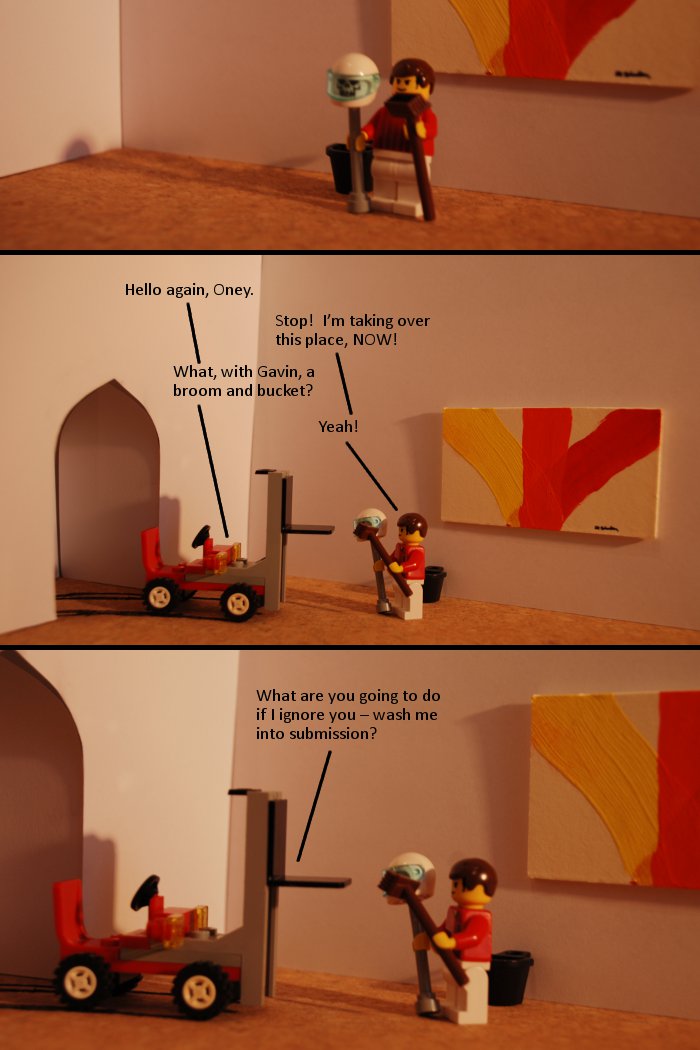 Wow.  Half-way to a hundred already.

That fateful, sugar-fuelled small-hours-of-the-morning creative session back in July feels like ages ago.  Well, it was ages ago, I guess.  The basic idea of picking characters to represent a cross-section of mine and Tim's and Sarah's creative output, and then throwing them all together in the same location and seeing what happened, had been festering away in the back of my mind for a couple of years - since before Brothers in Shells even existed, for that matter - but last July I finally put the idea to my fellow conspirators, and we got the ball rolling.

And now, there are 66 episodes completed, and 50 of them online, with many more in the planning stages.  Other people have been spotted crossing the threshold of the Fort, armed with web browsers, then with pencils, and presumably with a steely constitution in order to withstand the avocado-flooded labyrinth.  If you're reading this blog at all, then you're probably at least a little bit crazy - but we like crazy people, so you're very welcome here =]

If you'd sat me down last summer and asked me what I thought the fiftieth episode might involve, I don't really know what I might have guessed, but I certainly wouldn't have foreseen Fred Nagg standing in his hotel bedroom late at night and gradually losing his will to live as Darlan, comfortably ensconsed next door and blissfully oblivious to the ill he is causing, recaps his own life story in the form of a This Old Man rewrite.  Those of you who've read Darlan and Nagg's native comic will have noticed that its events are referenced in most of the song's verses, while verse 2 covers my little animated short Don't Flush, which Tim has been kind enough to grant full canon status relative to Brothers in Shells.  I really, honestly never saw that 50th episode coming, until the night back in mid-February when me and Tim sat hunched over my PC writing it.

Episode 50, besides being a landmark in its own right, is also part of one of the odd sequences of strips which crop up here and there in this project, and which (because I'm geeky like that) I find it interesting to spot and point out: in this case, it's the third in a sequence of four, each of which is illustrated by a different artist and in a different art style.  There's another (currently unpublished) sequence where seven consecutive strips each use a different font.

And in case you all suspect I've got some elaborate pre-planned agenda for the 100th episode: actually, no I haven't.  I'm looking forward to finding out where the next fifty strips take us!

Some stats so far:
Stay tuned for Episode 51...

Email ThisBlogThis!Share to TwitterShare to FacebookShare to Pinterest
Labels: Landmarks

Hi everyone, sorry this episode is late coming.  Blogger wouldn't let me log in on Friday, something to do with site maintenance.
Posted by Tim at 19:59 No comments: 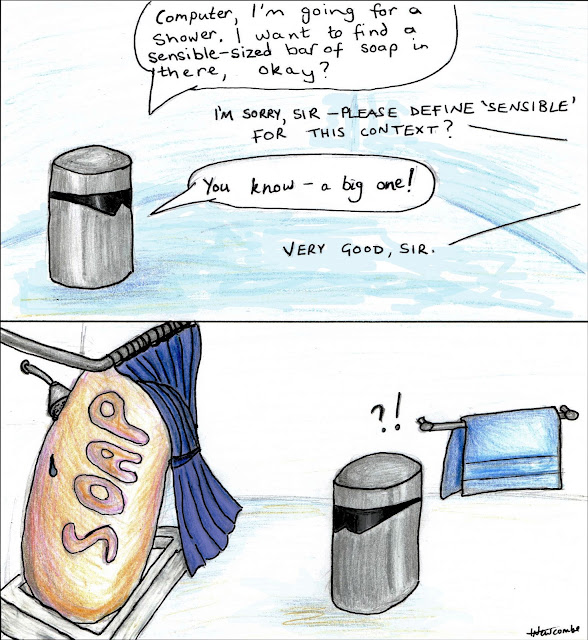 Script by MGHC --- Artwork by HRN (Again, thank you for letting me be a part of this!)
Posted by Unknown at 00:14 No comments: 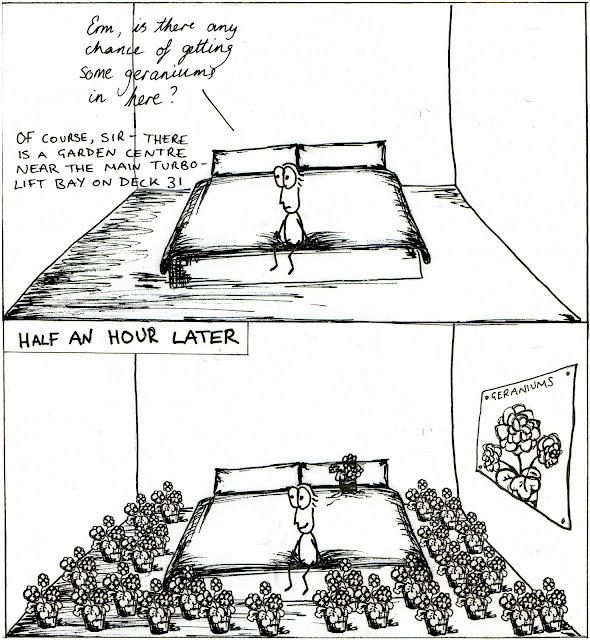 Script by MGHC --- Artwork by HRN (Thank you for letting me be a part of this!)
Posted by Unknown at 01:04 No comments: