By MGHC
Posted by The Colclough at 10:47 No comments:

Welcome to the 10th and last in the current series of Fort Paradox Backstage: Some Alternative Versions of Louis's Return to the Main Group in Episode 46, and Other Random Stuff.

By the time we got to Episode 30 or thereabouts, we'd realised that one of the original three snails had gone missing along the way, and by a process of elimination we figured out that it must be Louis.  So we decided that we'd write a chapter which showed what he'd been up to while everyone else was on the Bridge.  The result was Chapter IV, Louis' Side Trip, Episodes 39 to 44.  Chapter V wasn't really a proper narrative segment, more a bunch of largely unrelated episodes that happened around the same time, and its one significant objective was to re-unite Louis with the rest of the group.  Before we settled on the final version, set up in Episode 45 and shown in Episode 46, I came up with a couple of alternative versions, which looked a bit like this...

Yes, French people plural.  That was embryonic, that was.

A final few notes re: Chapters IV and V:
And that neatly concludes the Backstage posts for the first narrative day, just on time for us to temporarily go back to posting episodes on Tuesdays.  Last week's post (Episode 93) concluded Chapter IX, The Golf Tournament, and this Friday we kick off Chapter X, The Second Evening, which will be published on a twice-weekly schedule over the next few weeks.

FP Backstage: Who Done What

You've probably noticed that a lot of episodes have multiple scripting credits, most commonly me and Tim, or me and Tim and Sarah.  If you've ever wondered "but who wrote which lines though?", then this is your chance to find out - at least in part - with Fort Paradox Backstage: An Insight Into Who Was Responsible For Penning Which Lines in Which Episodes.

Specifically, I've got a breakdown of the Bridge scene at the end of Chapter III.  I keep all the FP paperwork in narrative order in my filing drawer and FP Backstage is working through it from front to back, and since I did the Bridge concept art last week, the next thing to come up was a hand-written script page for the following few episodes.

What makes this page a bit more interesting than some of the others is that I'd used my highlighters to colour-code different bits of the page to indicate who came up with which lines, which I thought might make for an enlightening read for the rest of you. 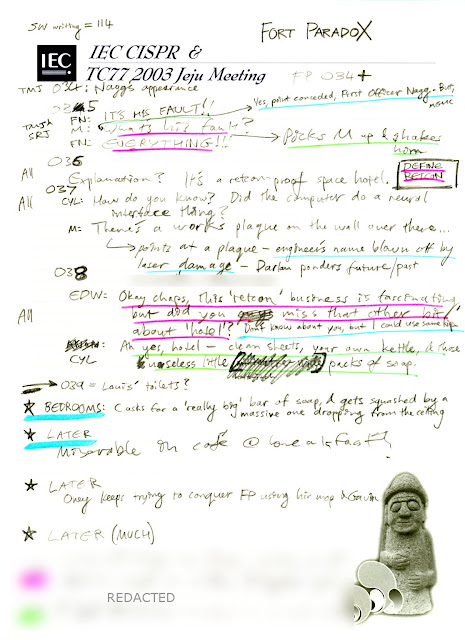 Scripts for Episodes 34-38, with notes for what became 39, 48, 51 and 55
Probably my favourite example is Episode 35, where you can see pretty clearly how it developed - Sarah picked up Tim's line of thought from the previous episode and carried it another step to create the next punchline, then Tim took it back and added the stage direction to emphasise the point, and then I came along being all pedantic and added the first half of Mallard's line, because we needed to establish that Nagg is serving as the Fort's first officer.

Here's a new version of the episode, with colour-coded overlays to visualise who wrote what: 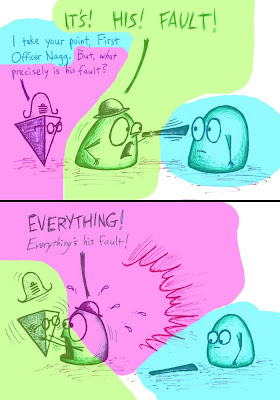 Welcome back!  Today seems to be Tuesday the 10th of January, which means it's time to resume posting, and we're beginning with another Backstage thingummy just like we said we would.  Specifically: Fort Paradox Backstage: Designing and Building the Bridge.

I can't remember when we worked out that Fort Paradox was a ship.  In my earliest concepts, the setting was going to be a huge building rather than a spacecraft.  But once we'd decided it was a starship, it seemed logical that there would be a bridge.  Ships have bridges, after all.  And of course, the cast would end up on the bridge sooner or later, so we'd need to figure out what it'd look like.  Turned out it was sooner.

I'll admit up front that my notion of "Ship's Bridge" has been influenced far more by Star Trek than it has by actual ships, and although the layout of FP's control room isn't quite a clone of the Enterprise's, it does have a lot of subconscious influences from its televised predecessor.  Perhaps the most important difference is that FP's bridge, instead of a viewscreen, has an actual window across the front.  Two, in fact - the concept is that the Fort's deck numbering starts from 1 (the bridge, and a few other executive rooms) at the top, and then the numbers increase as you move downwards.  Yes, that's backwards compared to what we're used to in planetside buildings, but it has a narrative advantage in that we don't need to specify how many decks the Fort has, which means we could (in theory) keep going down and down for hundreds or even thousands of decks if we decided we wanted to.  The Void Window is six decks tall, beginning at 1 and extending down to 6 (where the viewing floor is located), and the bridge has two layers of window: one separating the bridge from the upper reaches of the viewing floor, and then beyond that the Void Window itself separating the interior of the Fort from the cold nothingness of space.  Probably simpler to explain with a diagram: 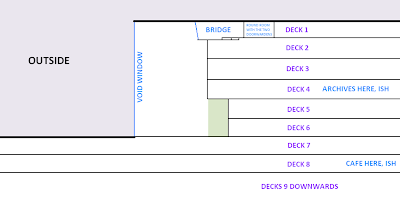 The structural relationship between bridge, Void Window, and a couple of other bits, in side profile
The bridge layout itself didn't work out very well on my first attempt.  I felt that the round geometry felt too forced, especially the odd crescent shape of the 'dais' area at the back.  The second version gelled much better with the overall feel of the ship so far, was going to be much easier to draw, and had the added bonus that it gave me space to fit in a ready room.

Concept sketches for the bridge
You might like to cross-reference the Version 2 sketch (lower left) with the bridge as it appears in the later part of Chapter III (see Episodes 32 to 38) and in Chapter VIII (Episodes 79 to 84).  The double door in 32 is the same one seen (from the other side) in 38, 79 and 84.  In fact, in 84, the door is open and you can see a little bit of the round Doorwarden room for the first time since 32.  See, the webcomic's geography and stuff does add up!

...okay, there might also be a viewscreen as well as the windows.  But we haven't quite made our minds up, and if it does exist then it's never been visible in any of the 'camera angles' we've drawn yet.  We'll get back to you on that one if there's ever any more news.


Tune back in on Friday for Episode 92.