Last post before Christmas?!!  Yes.  But let's get today's episode done with first:

By MGHC
So, anyway, the holidays are almost upon us.  People are going to be seeing relatives and all that business, which usually makes regular webcomic postings somewhat difficult.  So we've decided that Fort Paradox will simply hibernate for a fortnight over the height of the festivities, and posting will resume on Monday 3 January 2011.

Yes, that's right: Monday.  Strips 15 to 20 are all shortish, and all fit together to form one big conversation, so we've decided to run them daily across a single week when we get back after Christmas, and then resume our usual slower schedule from Strip 21 onwards the following week.

Most if not all of our other webcomics are also taking a bit of a festive hiatus: Cylinder and Miserable has its last post for 2010 tomorrow, and Alien President had its yesterday, and both strips will resume on Monday 3-1-11, the same as Paradox.  Tim has announced a 3-week break for Sidewards starting today, with posts resuming on Monday the 10th.  Not sure about Brothers in Shells at the moment.

So, a merry  Christmas and a happy New Year to you all!  See you in January.
Posted by The Colclough at 10:12 No comments:

By MGHC
Posted by The Colclough at 09:26 No comments:

By MGHC
Posted by The Colclough at 09:33 No comments:

By SRJ
Posted by scruffytheshetland at 19:33 No comments:

By MGHC
This is pretty much the end of the opening chapter, The First Arrivals, and from the next episode onwards the story moves on to chapter 2, In Search of an Avocado Smoothie.  Stay tuned!
Posted by The Colclough at 09:01 No comments:

By MGHC
Posted by The Colclough at 09:05 No comments:

By MGHC
Posted by The Colclough at 09:02 No comments:

Yet more random oddness... Check back Friday 12th for more!
Posted by Tim at 14:34 No comments:

Script by MGHC & TMJ & SRJ --- art by TMJ
The first introduction of both the Snails from Brothers in Shells, and pencil art work in Fort Paradox.
Episode three on Tuesday 9th.
Posted by Tim at 09:45 No comments: 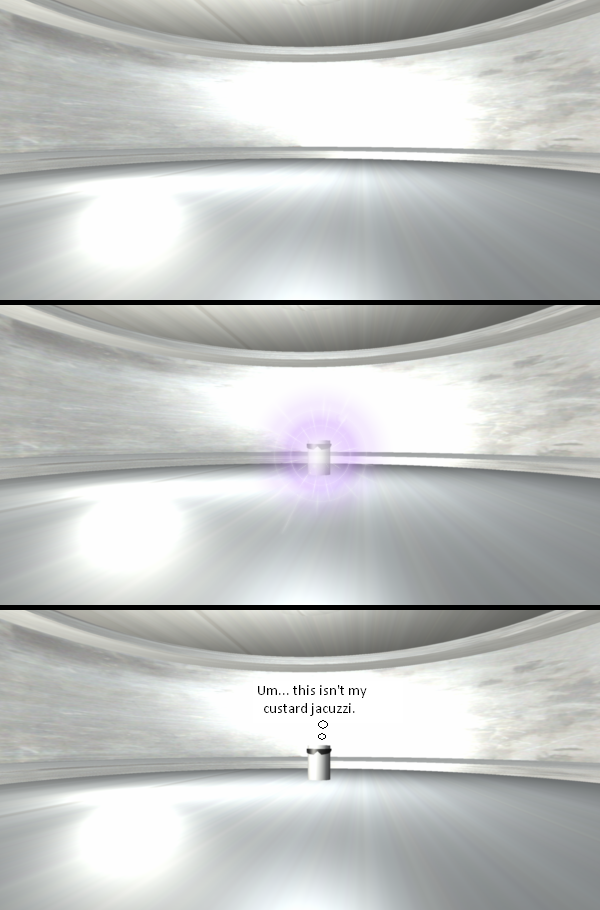 Let it begin!  As you can see, we decided to kick the thing off with a nice shiny CGI-render strip, to give a good first impression 8]  I should warn you that the sanity levels decrease rapidly from here on in...
Check back on Friday for Episode 2.
Posted by The Colclough at 11:01 No comments:

There is a space next to the door where you can leave your coat, shoes, umbrella, and - should you feel so inclined - your brain.

What you are about to witness (assuming you keep reading this blog, and you don't just run away screaming instead) is the beginning of a shiny new cross-continuity webcomic adventure, written collaboratively by a team of three writers/illustrators, and featuring characters borrowed from several of our pre-existing fictional universes.

Just so you know who you're dealing with, we are Matt Colclough, Tim Johnston and Sarah Johnston, and our previous creative output has involved several other comic strips, including Brothers in Shells, Cylinder and Miserable, and Grace and Caffeine, and various short films (usually but not always animated) including Alpha One's Laser Café, Alpha One's Quantum Shampoo, X-Battles GT and The Bookworm.  The basic notion behind Fort Paradox was to get some of our favourite characters from different universes, and put them all together in a new environment and see what happens.  Random zaniness will hopefully be the order of the day.

The cross-continuity-webcomic concept has been done before, but not by us - and therefore, if we say so ourselves, it hasn't yet been explored to its full potential.  We aren't going to tell you up front which characters will appear, or even what the titular 'Fort Paradox' really is, but we do have a back-story for the Fort, which will gradually be revealed as the comic progresses, and eventually the plot will involve characters from all of our other major projects.  At the time of writing, we have the first 25 strips finished, and further plot discussions are pending, so in some ways we're as much in the dark as you are about where the story is going to end up.  But it'll be fun finding out!

One of the joys of FP, as opposed to all of our other comic strips, is that instead of sticking to a single rigidly consistent art style (as our previous strips have done), this project will shift back and forth between pencil sketches, ink drawings, photographs, paintings, CGI renders, and goodness knows what else.  The metaphysics-bending nature of the project allows us to get away with more experimental art styles for some episodes, which we're rather enjoying.

The schedule, like the art style, will probably be variable, but for the time being Fort Paradox will publish twice a week - on Tuesdays and Fridays - which means that Episode 1 will be appear right here on this blog tomorrow.  Watch this space...

If you've found this blog already, then you're early for the party.  The blog is still at the setup stage, and the cross-continuity webcomic Fort Paradox hasn't actually started posting yet.  We've got 25 episodes in the can and ready to go, but we haven't finished thrashing out posting schedules and one or two other details.  However, we should be ready very soon.

So: watch this space, and before long you will be rewarded with semi-regular doses of brain-addling weirdness from the deranged minds that brought you Alpha One's Quantum Shampoo, Brothers in Shells, and Cylinder and Miserable...