As a sequel of sorts to last week's post, I present Fort Paradox Backstage: D'Antarran As it Wasn't.

When I wrote those three preliminary script drafts, I had a rather ambitious idea in my head about what the setting would look like.  The notion was of a planet, once home to an advanced sentient-machine civilisation but now abandoned and fallen into decay, with the comic taking place (or at least starting off) inside a vast building in the middle of a city.

I initially intended the architectural design to be a fusion between the grand canyon and all those mediaeval buildings where each storey leans further out over the street than the one below, all executed in glass and metal, and I saw the thing in a colour palette not too far removed from the scene in Blade Runner where you can see the sunset from inside the Tyrell pyramid.

I never drew it.

Never, that is, until now.  Having shown you the scripts last week, I decided it was finally time to exorcise that old image of the ruins of D'Antarran from inside my head and get it down on paper.  And then once I'd got it on paper (more or less - it doesn't quite get the valley effect I was after, but it's not too far removed otherwise) and I'd scanned it into the computer, I decided I could probably make it a lot better with a bit of digital manipulation - so I set about manipulating, and after a couple of hours' work, here's the finished article: 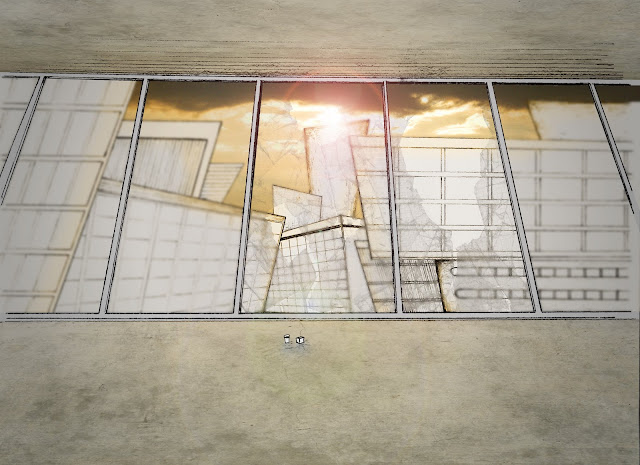 The D'Antarran Warp Episode 1: Cylinder and Miserable immediately after arriving in the ruins of Forkley's ancestral homeworld
(Thanks to www.cgtextures.com for the concrete, sky and broken-glass layers.)

I deliberately drew this to reflect my original vision of D'Antarran, despite the fact that Tim and I have now extensively revised our ideas about the history of the planet, including the addition of a molluscoid race who would have been responsible for building most of the infrastructure and creating the machine species of which Forkley is a member.  The S'Anonh, as we called them, would have favoured an architectural style where most large buildings had a central atrium with a spiral ramp giving access to all of the floors, instead of stairs - gastropods don't like stairs.  So if I drew you a picture of D'Antarran as we envision it now, then the overall tone would likely be similar, but the horizon would be filled with spiralling structures reminiscent of upended snail shells of assorted species.  The Japanese Wonder Shell probably gives the best approximation of the shapes I'm on about - picture a load of those, of various sizes, planted in the ground with the spiral ends pointing up, and you won't be too far off what's currently in my head.

I'm glad I've got that off my chest at last.