The Triumphant Return of Tuesdays!

Hello all
IT'S REJOICING TIME!!! We come bearing glad tidings: Tuesday postings will resume from next week!  (I.e. Episode 27 will be published on the 22nd.)

We're currently in the middle of a massive writing binge - February looks set to become our most productive Fort Paradox-writing month ever - and the buffer is filling up nicely: 20 episodes and counting, with several more expected in the next week or so.  So in keeping with what we said last Friday, to the effect that we might restart Tuesdays once we had 20+ strips in the buffer, we're restarting Tuesdays.

And to tide you over until the next post, we've decided to compile a little sneak preview of what's coming up... the general idea being to whet your appetite with tantalising snippets of artwork while remaining as obscure as possible and keeping the plot firmly under wraps.  The Whovians among you should know what we mean if we say we're Moffating. 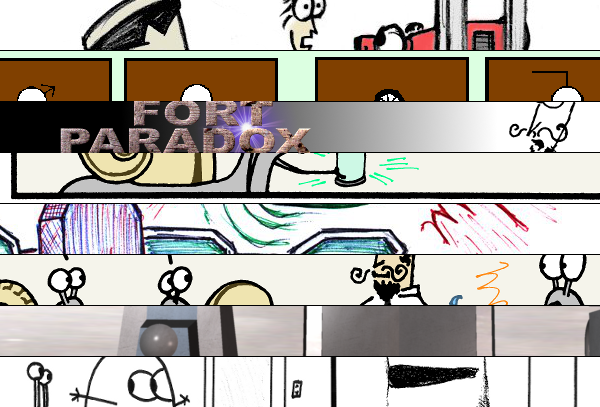 Even though Weekly FAQs were invented to compensate for the lack of Tuesdays, we're going to carry on with them for at least a couple more weeks, as we've got questions that need answering.